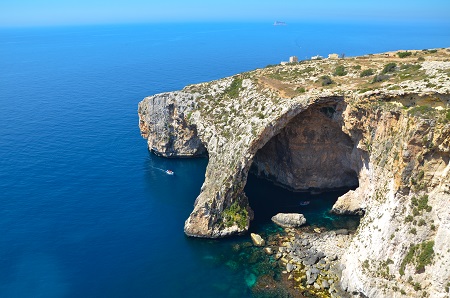 Malta is a never-ending treasure trove of fascinating places to explore and be inspired by. One such place only 30 minutes from No 2. Labini is the Blue Grotto, historically known as Il-Hnejja (The Arch). Located on the Southern side of the island, this coastal feature is only accessible by boat from nearby Żurrieq.

The name ‘Blue Grotto’ was given to the site by a British soldier who thought that the spectacular caves reminded him of Grotta Azzurra in Capri and so it should have the same name. The south west of Malta is famed for its rocky shores and coastal caves and Blue Grotto certainly doesn’t disappoint with spectacular blues and greens lighting up the water.

You can only enter the Blue Grotto by boat, and all trips leave from Żurrieq daily (excluding Christmas and New Year) between 09:00 and 16:30 depending on the weather. The trip includes a short cruise of the area before you head through a mighty 140 foot high stone arch towards the caves. There are six caves in total, with the Blue Grotto being the largest. You’ll be mesmerised by the stunning displays of colour as the sun reflects through the water.

You can plan your trip carefully so that you can see the Blue Grotto at its best. The caves face out towards the rising sun and often creates the most dazzling of the colours. As the sky reflects the white sandy bottom, a bright cobalt blue colour emerges and the caves mirror the orange, purple and green of the minerals in the rocks. Arriving early also means you beat the crowds and the plethora of divers and swimmers who also explore this magical place. They can sometimes disturb the white sands below making the water less clear. So arriving early in the busier summer months is recommended. 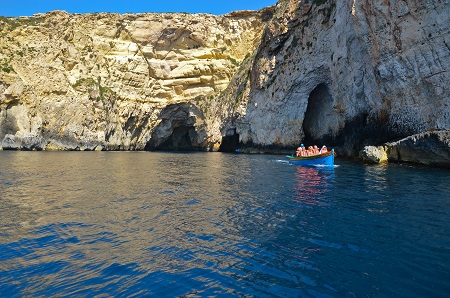 It’s easy to get to Żurrieq from No 2. Labini by either car or public transport bus route 201 travels between Rabat and Żurrieq where you’ll then be able to pay for a small boat to take you to the Blue Grotto. You can also spend some time exploring Żurrieq, one of the oldest towns on Malta and with many interesting ruins to explore.

Tweet
More in this category: « Pastizz - a Maltese treat Malta International Food Festival »
back to top
€114
Per Night